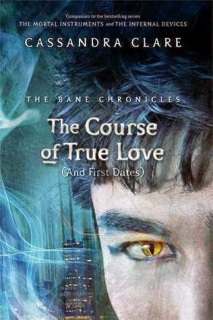 The Course of True Love (and First Dates) is a short novella written by Cassandra Clare and is a part of the larger Bane Chronicles.  It shows Magnus Bane and Alec Lightwood’s first date and the chaos that ensues, in addition to a glimpse at how Magnus views Alec.  It was an interesting read, but mainly left me wanting both better writing and a better story for these two characters.

While there were some really good bits in this novella, it mostly felt rushed and untidy, as if Cassandra Clare was struggling to meet a deadline.  I was left wanting the rough edges polished and smoothed out.

The following is one example of how good Clare can be with words.  It reads just like poetry, as if she were painting with words.

“If Jace was gold, catching the light and the attention, Alec was silver: so used to everyone else looking at Jace that that was where he looked to, so used to living in Jace’s shadow that he didn’t expect to be seen. Maybe it was enough to be the first person to tell Alec that he was worth being seen ahead of anyone in a room, and of being looked at the longest. And silver, thought few people knew it, was a rarer metal than gold.”

I’m working through the Mortal Instruments books and they seem to be better written and much less rushed, for which I am glad because I really wanted to enjoy the series.