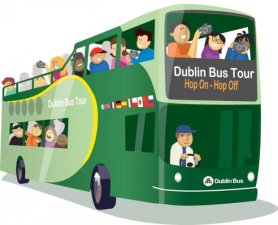 Our first experience riding the Hop On, Hop Off bus wasn’t particularly great. The driver, a Dublin native, rather brusquely stated that he didn’t like to hear his riders’ speaking. We were told, “Your talking has made me lose my track.” which appears to be interchangeable with the Americanism, “You made me lose my place.”

My instructor commented… “Not very nice! I didn’t hear this.”

I have noticed that the Irish phrasing sounds more solid, almost as if it carries the weight of age. The American way of saying things is often very impudent sounding, often quite brash. We are a young country, after all, and the older I get the more that I am able to recognize this.

Knowing the Irish are particularly proud of their breweries, I looked forward to getting a tour of one of the local facilities…

Teeling Distillery is the only working Distillery in Dublin. It is a small, family-owned business that returned to Dublin and became the producer of the first Dublin whiskey to be distilled within the city in over forty years.

Peter, a fast-talking, highly knowledgeable young man was our tour guide. He explained how the distillery tried to purchase the original land and when they couldn’t, decided to locate in the historic Liberties. The Liberties were located beyond the city walls and residents felt “at liberty” to brew whiskeys and beers without having to pay taxes on what they produced.

We learned about the different ingredients and cooking processes that the Teeling Distillery has used for years. From the selection of grains to the three copper vats where the solution is cooked down to become their signature whiskeys, everything at Teelings speaks of quality.

Traditions of old and new techniques come together in the three vats named after the Teeling daughters — Alison, Natalie and Rebecca — to create a wonderfully smooth small batch whiskey.

During the tasting portion of the tour, Peter explained the correct way to drink good Irish Whiskey…

As the Teeling family says…

At the Farmer’s Market next door, a kind sort of haggling over prices occurred as vendors and their customers decided the worth of vegetables, fruits, meats, and more.

The people in attendance were of the community, speaking familiarly with vendors and other customers, reminding me of the small-town grocery store where I grew up. It seems that much of Ireland still has that small-town sense of community. The people truly care about each other and their country.

We traveled through Dublin by Hop On, Hop Off bus and hopped off across the River Liffey at the Story of the Irish show.

Guided through history by an actor portraying an ancient Celtic god, Crannog, we learned of the origins of the Irish people in their own words. Crannog is one of the Tuatha De Dannan, a people of magic who are honor bound to tell the truth, and is the guide who protects you as you travel through history.

The original Irish people migrated up the coast of Europe at the end of the last Ice Age. A few of these people crossed the water in skin boats to the island of Ireland, leaving the coast of a Britain still connected to the continent.

From that first landing the island was able to escape much of the war and conquering forces of the mainland. The island of Ireland was (and has been) so isolated from the world that the gene pool remained undiluted for thousands of years and a prosperous agricultural community developed. This group of people were technologically advanced and traded with lands as far away as Persia!

The most wonderful thing I was able to take away from the show is that there is currently a revival to bring back many of the ancient Irish traditions, the culture, and language.

Hearing tales of ancient Irish kings and of the steadfast, enduring soul of the people was truly inspiring.