If you’ve been around for a little while, you’ll know that one of my goals for 2020 is to read more and, since I have limited shelf space, I plan to get many of these books from my local libraries. I will be trying for the Library Addict level, but may go on for the Library Card on Fire level… we shall see.

If you’d also like to participate, here’s what you’ll need to know:

One of my favorite things about working in the Youth Services department at the library, are the opportunities outside of our walls and I was excited to be asked to attend the 2016 Battle of the Brains competition at Houston High School in Germantown, Tennessee.  Battle of the Brains is a competition where young adults in the community are tasked with creating solutions to existing problems and to help assist in the planning of the future for their community.

This year, students were instructed to use math and science to tackle issues affecting Germantown’s future.  I saw projects ranging from a station to change out the batteries of electric cars to increase range, car radios that would automatically turn volume levels down, a sort of hover train transit system, and many more!

I took the chance to write a little more about two of my favorite projects, one of which one First Place!

“Classroom of the Future”

Lucas M. and Alejandro S. are two students who are passionate about learning.  These are two young men who are dissatisfied with the current education system and who have spent countless hours pursuing topics discussed in the classroom in their own time. 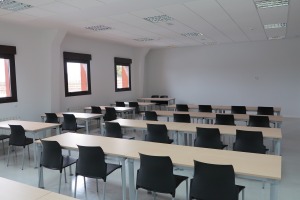 Their project, Classroom of the Future, is an idea for a school where students can learn life skills, have the opportunity to be hands on with technology and other resources, and (best of all) are encouraged to learn and focus on topics they are passionate about.

It is encouraging and inspiring to see that youth in our community are passionate about learning and are concerned about the education system enough to come up with a plan to make it better. 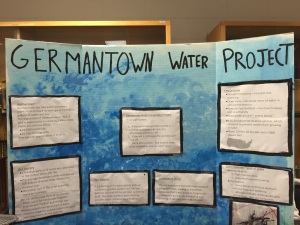 The four students who worked on the solution for over-consumption of water for lawns are resourceful and excited.  Their project considered three main areas; a rain level detector, a soil moisture sensor, and grass types working together to conserve water in Germantown.

The use of Fescue grass, a drought resistant grass that has deep roots and can help prevent erosion is just one part of the project. This grass would appeal to Germantown residents and businesses because it stays green year round.

Now, the two most important aspects of this project are the rain level detector which, unlike current models that are tripped by any rainfall, would only be activated when a certain level of rainfall has been reached.

Additionally, a smarter soil moisture sensor would monitor the level of moisture in the soil rather than the mere existence of moisture.  These three components were combined to create a feasible plan that could be implemented in the very near future.

Congratulations to the winning team for your “Sprinkler Sensor” success!  And many congratulations to all of the students that participated in the 2016 Battle of the Brains competition.  I was inspired by your passion and dedication and can’t wait to see what you create next.  The sky is the limit and you are already flying!

For the first time in years, I arrived at the library ready to start my work week only to discover that I wasn’t scheduled.  It was my day off!  I’d completely forgotten that, with the Thanksgiving holiday this week, I was not scheduled to work on Monday.

As mentioned, this is the first time in YEARS that I came to work on my day off!  And I think I know why…

While working in a Youth Services department has never been a dream of mine, having the opportunity to work face-to-face with the public, be a major part of the collection development, and create programming for the community has been an interesting challenge.

I enjoy the work I am doing and the people I work with.  My co-workers are supportive and kind, always willing to lend a hand when needed or make a coffee run when the caffeine starts petering out.  🙂

So, with Thanksgiving right around the corner I would like to say, “Thank you” to the Youth Services department of the Germantown Community Library.  Thank you for welcoming me, allowing me the opportunity to try new things, and for supporting me throughout all the changes we’ve faced over the last year.

Y’all are wonderful and I’ll never be able to put into words how grateful I am for you!

I had a moment to get my picture take with the #501stlegion members who were at #StarWarsReadsDay today at the #GermantownCommunityLibrary. #saturdaylibrarian

After more than ten years at the Germantown Community Library, I made the craziest leap of my career and accepted a position as a Youth Services Library Associate.  Yeah, it was a surprise to me too, since I’d promised myself that I would never cross the maroon carpet into the Children’s Department.

For the most part, working in the Children’s Department has been a pretty good fit; there were the normal bumps and grumbles as staff tried to accommodate a new person into an already cohesive team, I’ve had more than my fair share of freaking out while trying to catch up on everything I’m not familiar with, and it’s been stressful in entirely new ways to be working with young people day in and day out.

Here are just a few of the crazy days that I’ve had since joining the “Collective.”  (points to anyone who recognizes that reference)

One afternoon, I was the only staff person working at the Youth Services desk and I am embarrassed to admit that I panicked a little when six children all wanted to play with a different LEGO set (and then wanted to trade it for a different set moments later) and another handful of kids were asking for scissors, tape, and coloring pages.  While I couldn’t find the kid-safe scissors, we took Mom a pair of adult-scissors and found her to be happily surprised that her little girl “still needed her for something.”  I never did find the coloring pages with the “house on it” for another little girl.

Overall, it was the most stressful hour and a half I’ve had so far as a Youth Services Library Associate, but it was also one of the most fun (in the strangest of ways).  I was able to provide most of my patrons / customers with what they were looking for or something similar, the Teen Volunteer assigned to work the Summer Reading Desk was an invaluable source of support, and ultimately I found a home for all of the LEGO pieces that had lost their sets.  😛

Another encounter involved a young boy (maybe two or three) who was slamming a sign down again and again on the LEGO table.  We had just recently had one of those sign holders break and shatter into extremely sharp pieces that I cut my finger on and I didn’t want him to get hurt either… so, I walked over and nicely asked him to be careful with the sign so it wouldn’t break.  Mom made some comment that I took as exasperated humor and to which I responded with a smile and comment about the previously broken sign.

Barely twenty minutes later, I heard someone bouncing on top of the firetruck behind me (serious safety hazard, that) and turned to find the same boy.  He was an exceptionally well behaved kid, I promise, but I’ve seen kids go head first over the edge of the firetruck and am paranoid about it happening again… but with more serious consequences than the last time.

So, I went over to talk to him, asking him to “make sure to sit down or kneel if he was on top of the fire truck” and heard Mom make a nasty comment about how this was the Children’s area and kids should be allowed to do kid things.  I was shocked by how angry she sounded and let her know that I was only looking out for her son’s safety, as I’d seen other children take tumbles off the fire truck.

Without looking at me, she said, “I don’t know why you’re so mean.  Where did the nice librarian go?  You should leave and have her come back.”

I don’t think that I’ve ever had someone say something so harsh to me before and even now, recounting the event a month later, I feel hurt by her response.  Truly, I don’t think that she was really angry with me but that she had had a long, frustrating day and I was an easy target.  I hope that she and her son continue to use our library in the future and that we are able to move past that first encounter and have a productive library-patron relationship.

AND today is Star Wars Reads Day, which is the first really big event that I have planned (and executed) and I’m really nervous about it.  Here’s hoping it is a resounding success!

There have been ups and downs, really nice people and not so nice people, busy days and slow days, and I have learned so many new things!  I am excited to see where this new position takes me and what cool things I get to do in the future… I may write about my current job duties, for they are varied and awesome!

I doodled a sad face on my desk yesterday and found it transformed into a smiley when I came in today.

It’s my last day as the library’s Cataloger and I’m not sure how to feel about that. #bereft #librarylife

Live tweeting my #LastDayCataloging at the Library today. It is a sad, sad day for me and I think I’ve given myself a stress headache. 😦

Lunch is over. Heading back to the Reference Desk. …have to walk past the Cataloging station where I worked for 8+ years. #sadness

Trying to take a break at work and coworker won’t stop talking to me. #tired #sotired #wanttobeleftalone

Yay, I’m not alone! Other catalogers are using subfield $q in the 020 field as well. #tnla15 #SpecialFormatsCatalogingWithRDA

Did you know that PIN stands for Personal Identification Number and by saying PIN Number you are essentially saying number number?  Well, it does and you are!

Working in a public library means that I have the opportunity to work with people having different levels of technological know-how. I’ve had users ask “Mouse? Isn’t that a rodent?” and others asking “How do I code an app?” There is a pretty vast range of computer knowledge in our patron base and as a library worker it is my job to meet users at their level and be able to communicate and assist them on that level.

Sometimes, this means saying PIN Number because a patron might not know or understand what a PIN actually is.

As with any opportunity to teach, I use these interactions to explain what a PIN actually is or to help familiarize the patron with the program or internet browser they are using. One of the most rewarding parts of working with the public is being able to give them knowledge they didn’t have before and the ability to use that knowledge.

So, do you say PIN or PIN number when talking to the public?